The Bermuda Triangle is a region in the western part of the North Atlantic Ocean, where many air crafts and boats have disappeared. Many people believe that this happens due to extraterrestrial beings. Two of the most known disappearances are the US cyclops, and Flight 19 in December 1945.

This is where the Bermuda Triangle is located. It is about 440,000 square miles between the island of Bermuda, the coast of southern Florida , and Puerto Rico

Many people don’t believe that the ships and air crafts that mysteriously crashed and disappeared are not human error, or acts of nature. They believe that these strange disappearances are due to extraterrestrial beings and other mysterious things. Something that they also think might happen to cause the ships and air crafts to disappear is the strange magnetic anomaly that effects a ships compass, or methane eruptions from the ocean floor that may suddenly turn the sea into a froth that can’t support the ship’s weight causing it to sink. As you can see this would explain why ships would sink, however what these claims fail to explain is that ships are not the only thing that fall victim to the Bermuda Triangles waters, air crafts and virtually anything that enters the Bermuda Triangle disappears. No one who enters comes out, so we can only guess what happens inside the mysterious Bermuda Triangle.

For more information about The Bermuda Triangle Click Here.

A possession is when a spirit or demonic entity enters your body (usually involuntarily) and takes control of ones mind and body, forcing you to unwilling do and say things you don’t want to say or do.Anyone can get possessed even the most religious people can be possessed here is how to avoid it. The first thing you need to know is not to play with ouija boards, they are highly dangerous and can result in a possession. Other things to avoid, doing ghost investigations, trying to contact, or taunt the dead. Doing any of the things listed above puts you at risk of being possessed.Signs that you’ve been possessed, having a loss of memory,different personalities, having fits, fainting as if the person where dieing, superhuman strength, scratches and bite marks, and speaking foreign languages that the person has no knowledge of.Demons possess you by finding your weakness or your personal sin. They need to find this weakness so they can open the doorway inside you to take over your free will. Possessions are no joke and you must be careful or you could end up being possessed.

For more information about how to avoid demonic possession click here.

Orbs are said to be balls of energy that spirits form. The only way you can see an orb is in a digital photograph or recording. Digital cameras work on infrared and it’s this feature that lets the camera pick up these strange balls of light which are known as orbs. Many skeptics believe that orbs are just particles of dust, hair or something similar which is illuminated by the cameras flash. One theory about orbs is that because people can often capture orbs, we can assume that spirits prefer orbs over other ways of appearance, most people think that spirits do this because orbs being so small  take up less energy than apparitions. Have you ever taken a picture in the dark of the night and found that there where orbs in your picture? I believe, I myself have taken photos that have orbs in them in Beautfort South Carolina on Black Beard’s Tour in a graveyard. 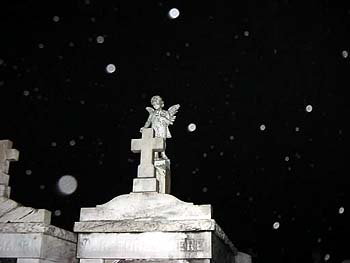 In the above picture are orbs surrounding the gravestone.

Want to know more about orbs and spirits? Click here

An apparition is the appearance of a spirit either from a human or animal. Apparitions often look solid but some can be transparent. Full body apparitions are seen Occasionally but the most often ones are of only upper body apparitions such as the face and other body parts. Apparitions of the dead may appear as a plea for help, to finish unfinished business, or just to say farewell. There is usually a reason that an apparition appears but sometimes they do just appear for no apparent reason. In my opinion apparitions are real, and I believe that sometimes spirits do find themselves trapped amongst the living and appear in front of the living for whatever reason they may have.

This is an example of a full body apparition

Ever since the invention of electronic voice recordings people have found odd voices on their recordings and have often claimed them to be the voices of spirits, Sometimes speaking directly to them, even though no one else was present but themselves these strange voices are called EVPs. An EVP is an Electronic Voice Phenomena which is when someone or somethings voice appears on a recording even though the person was alone or was silent during the time of the recording. A good way to get an EVP is by asking questions like, how did you die or why are you here? The answers that investigators normally get are short sentences, single words, groans, or other vocal noises, they can only try to make sense of this gibberish. Some of the words they may get are cries for help or warnings telling them to leave. Sometimes when people say they have a EVP it may be just a common noise that they mistook for the voice of a spirit. For example old pipes can sound like moans and the wind blowing threw trees can sound like whispers so it’s really easy to get them confused. I believe that some EVPs are real but some people would disagree with my opinion but there have been lots of credible EVPs by famous investigators.

Welcome to your brand new blog!

This is a sidebar and can be changed in Widgets in your dashboard.

You can also modify number of sidebars in theme options!